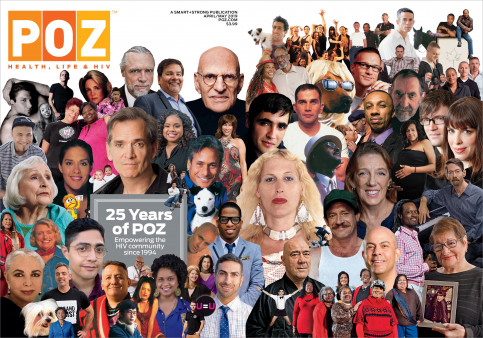 Special issue spotlights what POZ means to the HIV community

NEW YORK CITY, April 1, 2019 — POZ magazine, the award-winning print and online brand for people living with and affected by HIV/AIDS, today released a special issue marking its 25th anniversary. The April/May 1994 edition was the inaugural.

The collage on the current cover showcases dozens of people, as well as dogs, artwork, a Muppet and more, from past covers. For the cover story, POZ caught up with 25 advocates who were deeply affected by their appearance on past covers.

“The early ’90s were trying times in the epidemic, it was a challenge to believe that tomorrow would be better,” said Oriol Gutierrez, POZ’s editor-in-chief. “POZ founder Sean Strub thought otherwise,” Gutierrez continued.

“Twenty-five years later, POZ persists,” Gutierrez said. “Through it all, the core of our mission has remained unchanged, to remember our history and to be a mirror for the HIV community,” concluded Gutierrez.

As a long-term survivor, Strub knows what it means to remember. In this issue, POZ also catches up with Strub on his life after POZ, including serving as executive director of Sero Project and mayor of Milford, Pennsylvania.

This special issue also includes an excerpt of a 1994 exclusive Q&A with the late AIDS activist and MTV reality star Pedro Zamora and a retrospective of AIDS memorials across the country, as well as a glance at HIV-related themes over the years.

Go to POZ.com/25 for complete coverage of our 25th anniversary.