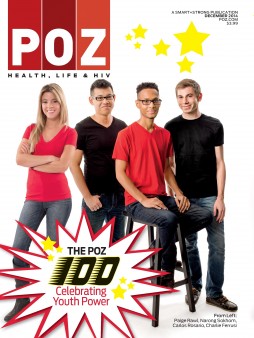 POZ magazine, an award-winning print and online brand for people living with and affected by HIV/AIDS, today announced the fifth annual POZ 100, also marking their 200th issue and 20th year in publication. This year, POZ asked individuals and organizations to nominate young people under the age of 30 in their communities who are making a difference in the fight against HIV/AIDS.

This year’s list includes a diverse group of 100 individuals from across the United States and around the world. The list also includes both people living with the virus, such as youth activist Paige Rawl, as well as HIV-negative people, such as Miss America 2010 Caressa Cameron-Jackson and Ryan Lewis, half of the Grammy-award winning hip-hop duo Macklemore and Ryan Lewis. From the famous to the unsung heroes, all of the honorees are doing their part in the fight against HIV/AIDS.

“For more than three decades, HIV/AIDS has been fought mostly by those who were already adults when the epidemic began,” said Oriol Gutierrez, POZ editor-in-chief. “In that time, a new generation has entered adulthood having only heard stories of the early days and never knowing a world without HIV. This new generation of advocates is fighting HIV for a variety of reasons, but regardless of their motivation, these young people could be the ones to finally put an end to AIDS,” he continued.

“We are thrilled to honor the work of all the advocates celebrating youth power on the 2014 POZ 100, from the United States and around the globe in places as diverse as the Netherlands to Uganda, and the hope they are giving all of us as we begin to see the possibility of a world without AIDS,” he concluded.


POZ is an award-winning print and online brand for people living with and affected by HIV/AIDS. Offering unparalleled editorial excellence since 1994, POZ and POZ.com are identified by our readers as their most trusted sources of information about the disease.

POZ is published by Smart + Strong, which publishes health-focused magazines and websites that empower and inspire. In addition to POZ, our award-winning brands include AIDSmeds.com, Real Health magazine and RealHealthMag.com, and Hep magazine and HepMag.com.