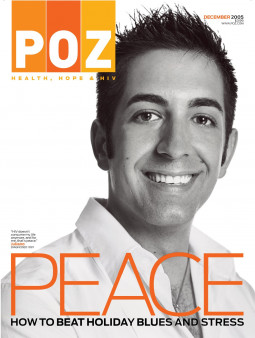 Decoding HIV And the Holiday Blues

The December issue of POZ, America’s leading magazine on HIV and AIDS, offers the following stories:

HIV AND HOLIDAY DEPRESSION: Though seasonal depression has long been clinically acknowledged, researchers are finally charting its devastating impact on people living with HIV. Patients are less likely, for instance, to take their HIV medication. Dr. Judith Rabkin, PhD, professor of clinical psychology and psychiatry at the Neurological Institute of New York at Columbia University, even calls holiday depression “a significant predictor of antiretroviral nonadherence.”

Other seasonal triggers include the often strained family relations of people with HIV; holiday travel, bingeing and substance abuse can also disrupt or interact with treatment regimens. In POZ’s cover story, you’ll meet people with HIV battling seasonal depression—and savvy psychologists and clinicians who offer tips and referrals from detection to diet to daily coping strategies.

HIV AND KATRINA: Read about how 7,500 people with HIV in New Orleans fled to safety and how the New Orleans AIDS community, aided by national AIDS officials and leaders, rallied to their support. Also, follow the saga of Roy O’Keefe, 58. “All of the hospitals and doctors [were] overwhelmed or closed down,” he says.  By the time he got blood work done in Dallas, his viral load went up.

IS SEX SAFER WHEN HIV MEDICATION SUPPRESSES THE VIRUS? According to a new study, transmission among heterosexual couples where one is positive and the other negative has dropped approximately 80% since the debut of HAART. Meet a couple planning never to use latex again.

PLUS: Debate our picks for the top five news stories of 2005—from the superbug that wasn’t to the new drugs that could change the course of HIV treatment. And just when you thought HIV couldn’t get any more, well, dramatic, several daytime soaps fold AIDS into their storylines: Read “As the Virus Turns.”

POZ can provide hard copies and PDFs of the issue and interviews with writers and editors upon request. For a full update on AIDS headlines and relevant links, check out POZ.com’s new weekly News & Views at www.poz.com.

Launched in 1994, POZ is an award-winning national magazine with a monthly readership of 150,000. POZ presents the complexities of life with HIV, from the perspectives of people living with the virus. POZ is published by Smart + Strong.